Wow, it’s now August. Since the last blog, plenty more bits and pieces have been going on.

The first and perhaps most important is that I am well underway with The Page. For those of you who don’t know, The Page is my second novel and is coming on quite nicely so far. I am thinking of posting a few chapters on here over the next month or so. Watch this space.

The Radio is continuing to pick up more good reviews from independent book reviewers which means a lot to me. You can find the latest ones posted on the Reviews section of this website.

I have also added another page, the curiously titled ‘Speaking’ which you can see off to the left there. This will be updated regularly with various speaking events that I have coming up. There are a couple on there already, so if you get chance do pop down and say hello. Here’s a lovely wall display to brighten up your day… 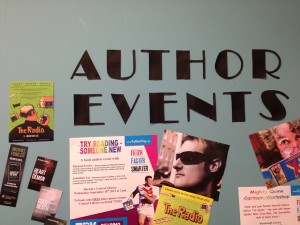 Which brings me on to the title of today’s blog. Any of you who have followed my earlier blogs will know that when The Radio was released I was checking for sales on an hourly basis. This has worn off slightly, however I recently noticed that the number of paperbacks available at Amazon was locked on ‘just six left’. The next day, it was the same. And the next. And the next. So, I thought I would buy a copy, just to see it drop to five. This was not an egotistical thing, I promise you. Simply a way of seeing the number in stock move and thus potentially causing a panic in the buying public (“Oh my god, what if they sell out and I never get one?”) causing a feeding frenzy. And so I did. The figure didn’t change. It stayed at six. Hmm, this couldn’t be right, I thought, so I waited an hour and logged back on. Still six. So I bought another (okay, okay so I’m still slightly obsessive). The figure didn’t move. So I waited another hour, still no movement. I nearly clicked for another, but instead showed some resolve and waited another hour. I logged on this time and at last my dreams had been answered. It had moved.

How can this be? I have absolutely no clue, and have decided to give my publishers and Amazon a rest by not questioning them relentlessly on this point. Now I have two spare first editions, so if anyone wants a signed copy, email me… (!)

Oh, before I forget I’m on Toby Foster’s Live-ish show (recording this Friday (23rdAugust)) and broadcast at 1pm on Saturday 24th August on BBC Radio Sheffield. It’s a kind of ‘Mock the Week’ type comedy show. Do be sure to listen in and then you can decide for yourself whether the title of today’s blog would have been more apt without the word ‘or’.

Finally, I’m three days short of a full twelve weeks without smoking. I’m thinking of applying for Rio in 2016.